People who know me, know that I am enthusiastic about Apex. But I am certainly not an Apex expert. By far not. The DBMS is where my knowledge is. But because they know of my enthusiasm, I often get the question whether Apex is mature enough for building a critical or large-scale WoD application.

I then (sigh and) reply by saying: "You are asking the wrong question." 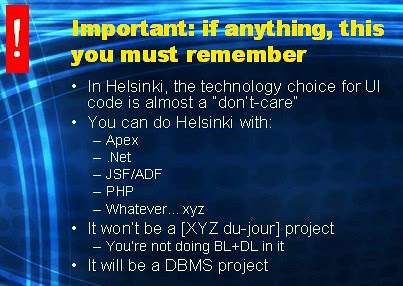 The majority of time spent developing a WoD application in the Helsinki way, will be spent on designing and developing the PLSQL and SQL inside the DBMS to implement all necessary BL and DL code.

So the question you should have asked, is:

"Is the DBMS mature enough to support this critical and large-scale WoD application project?"

To which the answer of course would be: 100% affirmative. This was the point of my first observation. The DBMS is mature.

So you see, the yafet that you use to implement UI-code is a second order question. It is still a relevant question of course, but for different reasons than usually intended by the one who poses the wrong question. Their intention usually is about the yafet's capabilities to do large scale BL and DL development. Which in Helsinki is irrelevant. The yafet should only be well capable of rendering UI. Most Yafets (even the sexy new ones like Apex) can do that, no problem. If you intend to also do BL and DL inside the yafet you're on your own. And you need to go ask a different person (I told you I'm not an Apex expert).

The reason why the question is not totally irrelevant has to do with the capabilities of the people involved in building the WoD application. Since choosing the yafet is of second order importance, you might as well choose one that those people are comfortable with. 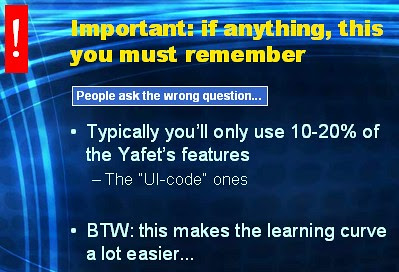 Remember observation four, the investment required for developers to become productive? Helsinki helps you here: you would only need to learn how to use the UI features of the yafet. And forget about its BL and DL capabilities.

Adverseries of the Helskinki approach always bring up the issue of how to prevent that all DBMS hosted plsql and sql code (for the BL and DL part of the WoD application) becomes one big unmaintainable bucket of spaghetti. The answer to that question is: you need to materialize the code classification and create layers of code inside the DBMS. I will start blogging about that in my next post.

By now I have reached the end of part 1 of my 2-hour presentation and break by leaving my audience with the following closing guideline. 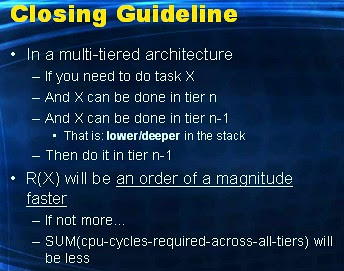 A beautiful example of practicing this exact guideline is Oracle's exabyte storage server. Without going into the details of it, what Oracle does here is push bits of a SQL execution plan further down into the technology stack which increases the execution of SQL by an order of a magnitude.

I rest my case.

Posted by Toon Koppelaars at 3:37 AM