So here is the last observation while looking back at 20+ years of (web) database application development. The fourth observation is about the required developer knowledge investment. How much time do you, as a developer, need to invest in learning and taking on the tools with which you can build database (web) applications.

Similar to the DBMS (observation 1) it was real simple to learn the application development tools in the early nineties. All it took was one weekend of reading the documentation and trying out the software tools. In the Oracle scene, Forms 2.0 was really not a too difficult tool. Steve Muench (as far as I know the "inventor" of the Forms product) did a real good job. Of course, it would take a year or two to realize how good the Forms product really was: i.e. what it did for you, so you did not have to worry about that (that = locking, preventing lost-updates, generating insert/update/delete statements, etc.).

Outside the Oracle tools scene you could also opt for "third generation languages" in those days. Turbo Pascal, Lattice C, Fortran and the likes. Combined with Oracle pre compilers, which gave you the ability to embed SQL inside the code, they would typically offer the possibility to implement performant batch-processes.

Then, in the early/mid nineties when (anonymous) PL/SQL was introduced in the database (oracle version 6) Steve gave us Forms 3.0. A huge leap forwards. It also had a local PL/SQL engine. The reference guide for 3.0 was more than twice as thick as the guide for 2.0 or 2.3. Do you see the resemblance with observation 1? It would take a few weeks to become really productive with this tool.

A few years later, moving from character-mode to GUI-mode, (the infamous early releases of) Forms 4.0 was (were) brought to us by Oracle. Which really took till Forms 4.5 to become stable. At this time other (third party) tools, such as Powerbuilder, Uniface, and maybe two or three others that I cannot remember anymore, were "hot" also.

By now the Forms product had reached a level of complexity where using Forms "generators" really became the way to build applications. Generators were already available in the char-mode era (with Forms 3.0). I forgot what the product was called. I think it was Oracle Case 5.0.

These generators added yet another level of complexity to the tool-stack that you, the developer, had to master, in order to deliver database applications. This however was solved by add-on utilities (headstart). Which again just added more complexity, if you ask me. Since you couldn't purge your Forms (builder, design-time) knowledge. A 100% generation was unrealistic, unless you were the actual developer of the headstart toolset. The majority of the projects always required "post-generation" development. And sometimes a lot so. Furthermore there was the wholy grail of keeping the forms re-generate-able. Only very, very, few projects managed to achieve that (and at a very high cost).

I used to be "all round". An application developer more than a DBA. I did both. But I decided to quit being a developer when Case Generator (later called Designer/2000 etc.) became the way to build apps, and move over to the DBA field. I knew forms inside-out, and was able to kick out screens really fast: I did not see how these "generators" were making my job easier. Of course I was already building database applications in a (pre-version-of-the) Helsinki approach.

The developer toolstack then moved to Forms6.0 and Forms6i: webforms. An applet running in your browser, dealing with the (client/server) forms. Obviously this was going nowhere...

Apart from the fact that it was way back to writing low-level code again, it was also code that was hard, no, really very hard, to read and thus, hard-like to maintain.

Over the years J2EE became JEE,. Design patterns and frameworks gave us 'lessons learned' and 'abstraction layers'. Writing low-level Java code was replaced by configuring frameworks. Of course you still have to know and understand Java, like you still had to know and understand the Forms builder product. Not only Java, but more technologies: html, Javascript, XML, cascading style sheets, etc. And let's not forget the frameworks-du-jour.

So this is observation 4: 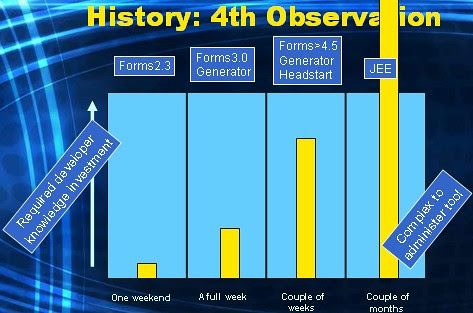 The ratio of "required knowledge investment" versus "produced output" for developers is way off the scale nowadays. For the more young people out there reading this blog: you have no idea with how little (compared to now) technological knowledge we were able to build database applications in the past. I also suspect that you find it very hard to keep up with, and to have broad and deep knowledge of, todays "tools" that you are supposed to use when building these kind of (web) apps. I far from envy you. It must be horrific.

There is no way one person can grasp all the technological knowledge that is required to build these kind of applications today. This is why development teams now always consist of several (different) specialists. And of course one "architect". The person to mediate and achieve consensus between all involved specialists. In my presentation I call the architect the person to keep TPTAWTSHHTF (*) away.

This is the last observation I wanted to point out.
In summary, here are all four observations:
In future installments on this blog I'll refer back to these observations.

First we need to spend some time on J(2)EE.
Stay tuned.

(*: The Person That Arrives When The Shit Has Hit The Fan)

Posted by Toon Koppelaars at 9:25 AM