In the previous post I gave a high level introduction into the MVC design pattern. This pattern classifies all code that you write to implement a database web application, into three classes:
I also showed that within the JEE architecture code can be deployed to many tiers. In this post I will talk about alternative MVC approaches by looking at the amount of application code that is deployed in each tier. A tier is considered fat if it holds lots of code, and thin if it holds little code. In this way we can generate eight alternatives: 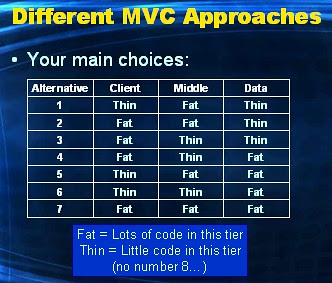 Number eight, Thin-Thin-Thin, is irrelevant and therefor not shown. I'll discuss each of above seven approaches in this post. 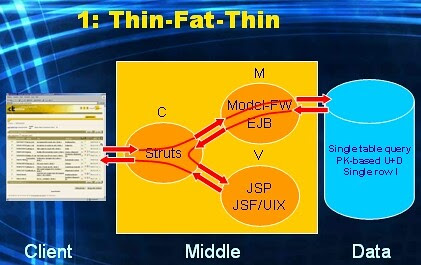 This is the typical JEE way of creating an HTML-based application. And it is I think by far the most popular approach. Control is implemented for instance with some control-framework (used to be Struts, but I think it's Spring nowadays). Model is implemented with EJB or some model framework (in an Oracle environment: ADF-BC). View is implemented with JSP or some view framework (e.g. UIX, JSF, ...). In this approach the browser displays a (poor) HTML GUI (thin), and sends HTTP requests to the controller. The controller then coordinates the execution of EJB code or model framework code. Inside these all business logic and data logic processing has been implemented (fat). Eventually simple (i.e. single table) queries , or simple (i.e. single row, primary-key based) DML statements are executed towards the database (thin). The controller then determines the next page to be sent back and initiates the View framework to do so. Both Control and View hold no business/data logic, since that would violate the MVC design pattern. 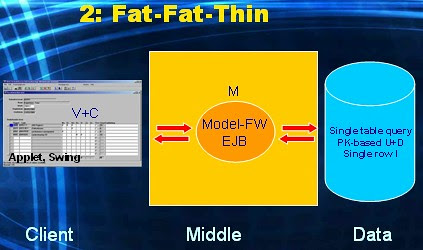 This is "client/server the JEE way". The client-tier runs a fat program (either Applet based, or Java-in-OS based). Control and View are implemented within this fat client-side GUI application. Model is implemented with EJB or some model framework. The client tier is in charge in this alternative (fat): it deals with creating the rich GUI and handling all UI-events (control) on behalf of the user. In this alternative the client delegates the execution of all business logic and data logic processing to EJB code or Model framework code, which is located centrally in the middle tier (fat). The database again only needs to serve simple queries and simple DML-statements (thin) initiated by the fat Model layer. In short, processing for V and C takes place in the Client tier and for M takes place in the Middle tier. 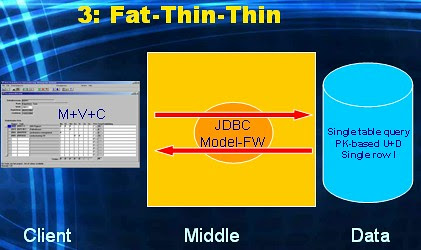 This is "client/server in the early days", pre Oracle7 (when stored pl/sql was not available yet). The application is again either Applet based or Java-in-OS based. The difference with the previous alternative is that all business and data logic is now also implemented within the rich GUI application running on the Client Tier (fat). So not only is this tier fat due to the rich GUI it offers, but also due to all the logic code it hosts. The fat client application will either communicate directly with the Data Tier via JDBC, or go through the Middle Tier via a thinly configured Model framework, i.e. it only offers database connectivity and does no additional logic processing in this case (thin). The database again needs to serve simple queries and simple DML-statements (thin) initiated by the fat Client tier. In short all dimensions M, V and C are located in the Client tier. 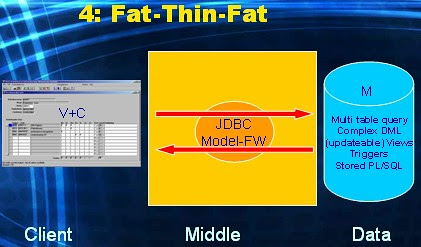 This I would call "client/server the right way". This is what client/server architecture evolved into at the end of the nineties. The M has moved from the Middle tier to the Data tier. The GUI is still rich (i.e. responsive) but all business and data logic is now taking place in the Data tier: the Middle tier (thin) only supports database connectivity from the Client to the Data tier. The database is now fully employed (fat) through the use of stored PL/SQL (functions, procedures, packages), triggers, complex views (updateable, possibly with Instead-of triggers). Also the complexity of data retrieval and manipulation is now dealt with by programming sophisticated SQL queries and DML statements. In short View and Control sit in the Client tier, and Model in the Data tier. 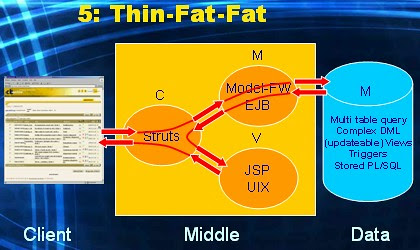 This is again an html-based application (thin Client tier). All dimensions of MVC are available in the Middle tier (fat). Business and data logic processing takes place not only within the Model framework, but also within the Data tier (fat). The big challenge in this alternative is: how do you divide this logic processing? What part do you implement within the Java realm, and what part within the PL/SQL realm of the DBMS? For this alternative to be manageable, you first need to establish a clear set of rules that prescribe how logic is to be divided accross the two tiers. 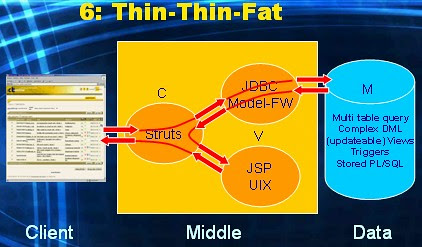 This one is my personal favorite. It is essentially (the popular) alternative one, only the M has now moved from the Middle tier to the Data tier. All business and data logic processing takes place inside the database (fat). The Model framework is deployed only for database connectivity: no additional logic code runs within this framework (thin). Compared to the previous alternative (five), the division of the business and data logic processing has been made 100% in favour of the Data tier. The database is now fully employed (fat) through the use of stored PL/SQL (functions, procedures, packages), triggers, complex views (updateable, possibly with Instead-of triggers). Also the complexity of data retrieval and manipulation is now dealt with by programming sophisticated SQL queries and DML statements. In short View and Control sit in the Middle tier and Model in the Data tier. This alternative is actually what the Helsinki declaration is all about (and I will revisit this, obviously much more, in later posts). 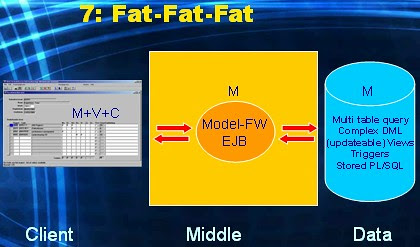 This is what I call the "Run, run, run! As fast as you can" alternative. Business and data logic is distributed among all tiers: within the fat client, within the Model framework and/or EJB layer, and also within the database. The big challenge introduced in alternative five, is even bigger here. Managing application development within this architecture must be a complete nightmare. You'll end up with this approach if you put a PL/SQL wizard, Java evangelist and RIA fan all in the same project team, without adding a architect...

As said before, the most popular approach out there is: Thin-Fat-Thin the JEE way. Second most popular would be Thin-Fat-Fat which I see executed in two subbtle different ways:
The second Thin-Fat-Fat approach that I encounter is:
This last approach (due to reasons other than not having a relational database design) leads to inefficient use of the DBMS too which I would like to illustrate with a small example.

Bear with me please. This is fun.

Now what happens in this approach, is that the following API's are requested to be developed in the DBMS:
The middle tier will then call the first API. And per Parent row it will call the 2nd API and perform the aggregation in the middle tier. And per Parent row it will call the 3rd API. Inside Java the results of calling these API's are then merged to form the set of rows required to be displayed on the page for the end user. Joining rows is done by the middle tier code. The calling of all these API's is necessary because in the middle tier "object instances" of the class hierarchy need to be populated first.

Obviously calling the DBMS many times has a performance hit (which I will revisit in a future post).

How much more easy would it be to just create a view using the query-text above. And then query the view and display the result set straight on to the page? Bypassing the object class hierarchy in the middle tier alltogether.

Posted by Toon Koppelaars at 11:52 AM